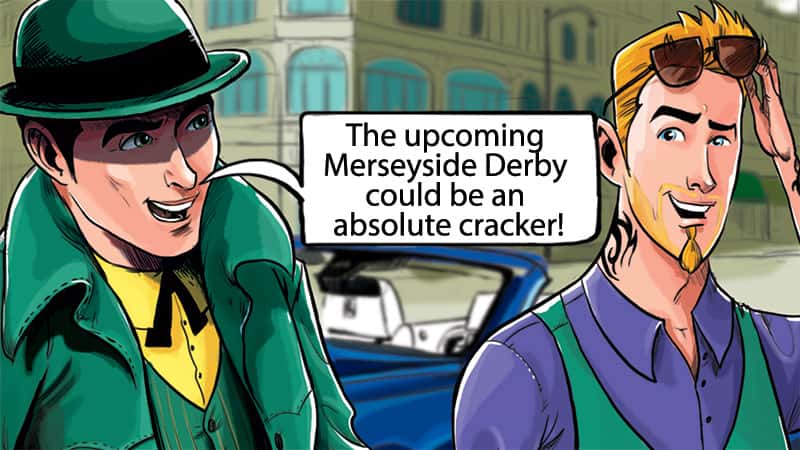 Almost all football fans, especially in England, will be very familiar with the rivalry between Liverpool FC and Everton FC, located in Liverpool. Everton is the older team founded in 1878, while Liverpool was founded in 1892. Therefore, it was in the 1890s that this derby was first played, with Liverpool FC being just formed and Everton FC moving out of Anfield, the current Liverpool’s stadium.

The derby is also well known by the name of ‘Friendly derby’. It got this name in the early stages because the stadiums Goodison Park (Everton) and Anfield (Liverpool) are separated only by Stanley Park (400m) and so are located in the same area of the city. This meant that there had been a lot of local families that had members supporting both Liverpool and Everton. However, since the mid-1980s, the rivalry has become increasingly intense on and off the field. This has mostly arisen due to Liverpool starting to have huge dominance over Everton, both in player quality and in financial terms. Thus, since the introduction of the Premier League in 1992, the clashes between Liverpool FC and Everton FC have seen more red cards than any other games or derbies.

Everton FC is the older team, founded in 1878 and being one of the 12 founding members of the Football League in England. Everton have actually played at Liverpool’s current ground, Anfield since 1884, as it was owned by their chairman at the time John Houlding. However, by 1892, Houlding got into a serious political argument with other members of the board that decided to buy a new ground (Goodison Park) for Everton FC that was just on the other side of Stanley Park (leading to Everton FC moving out of Anfield). Houlding responded to such an act by founding a new club to use Anfield: Liverpool (meaning that a former Everton FC chairman became the founder of Liverpool FC).

Itself, the city of Liverpool is statistically the most successful football city in England, where Everton FC and Liverpool FC won a total of 27 top flight League titles. Also, there has never been a season when neither Everton FC or Liverpool FC competed in the top flight (for a large majority of the time both teams occupied the top flight). Evrton have only been relegated twice in their history and have played over 100 seasons in the top flight, which is more than any other football team in England. However, Liverpool have won more domestic and International trophies, establishing themselves as one of the biggest and most successful football clubs in the world.

The following list includes all of the major titles won by Liverpool FC and Everton FC to date. The number in ‘()’ refers to the number of the associated titles:

● European Cup (6 - more than any other English side)

One other trophy for which both of these sides compete, almost every year since 1892, is the Liverpool Senior Cup (involving 15 football teams in the city of Liverpool and the surrounding areas). However, for many years Liverpool FC, Everton FC and Tranmere Rovers FC only field reserve and youth sides against the likes of Prescot Cables, Southport and Marine.

This competition has been won by Everton FC for a record of 45 times, while Liverpool FC hold 39 Liverpool Senior Cup titles.

Matches between Liverpool and Everton were almost always close affairs. Especially during the 1960s when both Liverpool FC and Everton FC were regular winners of domestic trophies, with Merseyside derbies becoming one of the most entertaining games to watch. However while Liverpool became stronger and stronger during the 1970s and 1980s, Everton went through a relatively miserable spell winning very few trophies.

Since that time Liverpool FC truly asserted its dominance over Everton FC in Merseyside derbies. The All time series includes; 66 Everton FC victories, 74 draws and 95 Liverpool FC victories. This statistic, once again, shows that Liverpool is overall the more dominant side, but with a decent number of Everton FC wins and many draws it really does indicate the competitive nature of this historic derby.

As many football fans will be aware these two teams have had truly tremendous players coming through. It would be almost impossible to make a list of all world class players that have made their mark in the Merseyside derby, but if I had to name a few I would go for; Ian Rush, Dixie Dean, Kenny Dalglish, Steven Gerrard, Jimmy Settle, Neville Southall, Robbie Fowler…

Similarly, it would be extremely difficult to pick out the best game out of so many that have been played, but if I had to pick one it would be Liverpool’s 3-2 win over Everton in the 1989 FA Cup final.

Overall, the combination of such rich competitive history, passionate supporters and quality players involved, really does make this derby a spectacle almost every time around. Thus it rightly deserves to be mentioned among the best football derbies in England and beyond.

● Top Scorer - Liverpool’s Ian Rush with an astonishing 25 goals in 36 games, with Dixie Dean being second with 19 derby goals for Everton.

● Most appearances - Everton’s goalkeeper Neville Southall with 41, also having the joint best clean sheet count of 15.

This player placed bets on the website of 1xBet, one of the world's leading bookmakers, and risked a large sum of 100 thousand ten... Read more

As many may be aware, esports have become increasingly popular with many more (young people in particular) starting to take part. ... Read more

Matches between Liverpool and Everton were almost always close affairs. Especially during the 1960s when both Liverpool FC and Eve... Read more