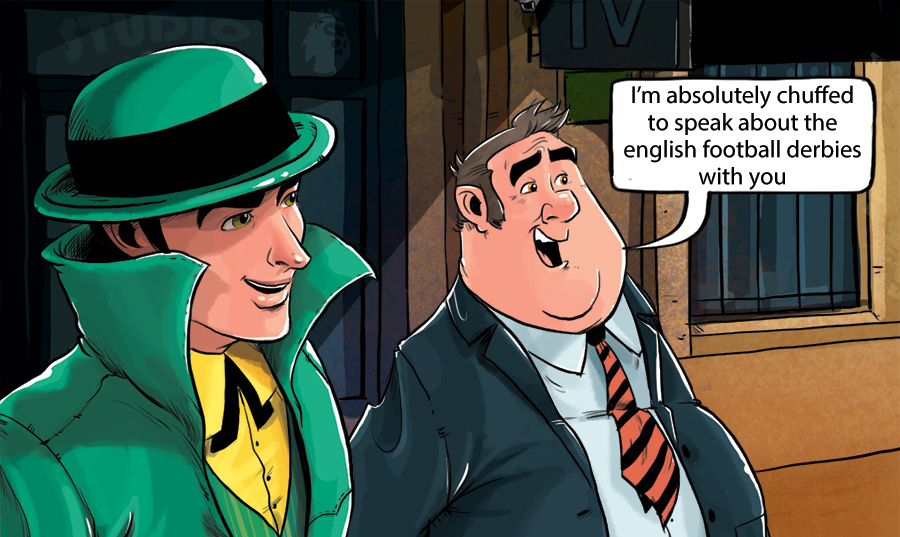 To almost all football fans around the world, derby days are something special in their own football calendars. In the light of this, English football derbies are something special. With so many different derbies and football rivalries around England makes these football games even more spectacular than any others. These matches take place in almost all professional and armature leagues, with the biggest ones having millions of football fans watching around the world.

The rivalry between two clubs is most often historic, with some dating back well beyond 100 years. It is well known that these games, in the past, resulted in plenty of violent conduct, but fortunately it is a lot less common now.

It would be very difficult to mention all English football derbies, but for this list I will only mention my top 5 English derbies, with the list being in no particular order. The derbies include:

Almost all football fans, especially in England, will be very familiar with the rivalry between Liverpool FC and Everton FC, located in Liverpool. Everton is the older team founded in 1878, while Liverpool was founded in 1892. Therefore, it was in the 1890s that this derby was first played, with Liverpool FC being just formed and Everton FC moving out of Anfield, the current Liverpool’s stadium.

Officially, the derby is known as a ‘Friendly Derby’; however, to some (in particular the supporters of Liverpool and Everton FC) this game is far from ‘friendly'. This can be explained by the fact that this game has the record for the most red cards in the Premier League era. The supporters of Liverpool and Everton FC are in fact one of the most passionate football supporters in England, that will support their teams to the very final whistle no matter the result. In addition, these two teams are currently, and have been throughout football history, full of high quality players that are capable of performing ‘miracles’. The combination of passionate fans and high quality football being played on the field make this derby among the most spectacular in the English game (and beyond).

There were times in the history of these two clubs that one was significantly stronger than the other, even playing in different divisions. Most noticeably, during the 26 years of Sir Alex Ferguson’s time at Manchester United, United were in fact for almost all of this time a much stronger team than Manchester City. Some United fans may even consider the game against Liverpool a much bigger occasion than the derby against Manchester City. However, with recent (2011) foreign investments in Manchester City, they have become a lot stronger, winning quite a few trophies ahead of United since 2011. Thus, the derby between United and City has become relatively equal in recent years, which has helped the game to be more watched and noticed by local and international fans.

These two teams have for a very long time been very far away from each other in the sense of footballing quality, with Arsenal being on top for a large majority of time (e.g. finishing above Tottenham for 21 years in a row). This hasn't prevented the games to be extremely fierce and competitive both off and on the pitch. In the very recent years Tottenham have started finishing above Arsenal in the league table due to now having a few world class players (Harry Kane, Dele Ali…). Thus now with these teams being more equal in quality the derby has certainly been made even more entertaining.

This Derby is being played in Sheffield and it is between two very old and traditional English football teams, Sheffield United and Sheffield Wednesday, who played their first game in 1893. This derby is very well known around England but for quite a while it has been played away from England's top football division, with neither team being able to assert dominance. The derby was nicknamed because Sheffield is known as a ‘Steel city’ due to the large and famous steel industry in Sheffield.

As mentioned, the teams are very equal historically with United winning only 3 games more than Wednesday. Most recently, Sheffield United were able to carve two promotions in 3 years and get From League 1 to the Premier League, while Sheffield Wednesday have been fighting for Premier League promotion for many years and always coming just short.

With the derby being located in Birmingham, the derby is played between Aston Villa and Birmingham City. The nickname for the derby comes from Birmingham being renowned as the ‘second city’ (by population) in England. The clubs first met in 1879, while Birmingham City were known as Small Heath Alliance.

Over the history of two teams Aston Villa has been more successful in both winning derbies and trophies. In  the most recent times the teams did not play regularly, with Birmingham being mainly in the Championship, while Villa have predominantly played in the Premier League. As for all derbies, this one was well known for some violence before, during and after the games. The most recent violent conduct was last season (2018-19) in the Championship, when a Birmingham City fan walked onto the pitch and punched Aston Villa captain Jack Grealish. Leaving the violence aside there have been some  great games between Aston Villa and Birmingham city in the past, which certainly do make this derby worth mentioning.

This player placed bets on the website of 1xBet, one of the world's leading bookmakers, and risked a large sum of 100 thousand ten... Read more

As many may be aware, esports have become increasingly popular with many more (young people in particular) starting to take part. ... Read more

Matches between Liverpool and Everton were almost always close affairs. Especially during the 1960s when both Liverpool FC and Eve... Read more