France meet Germany at the Allianz Arena (Munich) in the EURO 2020 Group F Round 1 match and the game kicks off at 8 pm (UK) on Tuesday, June 15. Read our reason for France vs Germany prediction and betting tips. 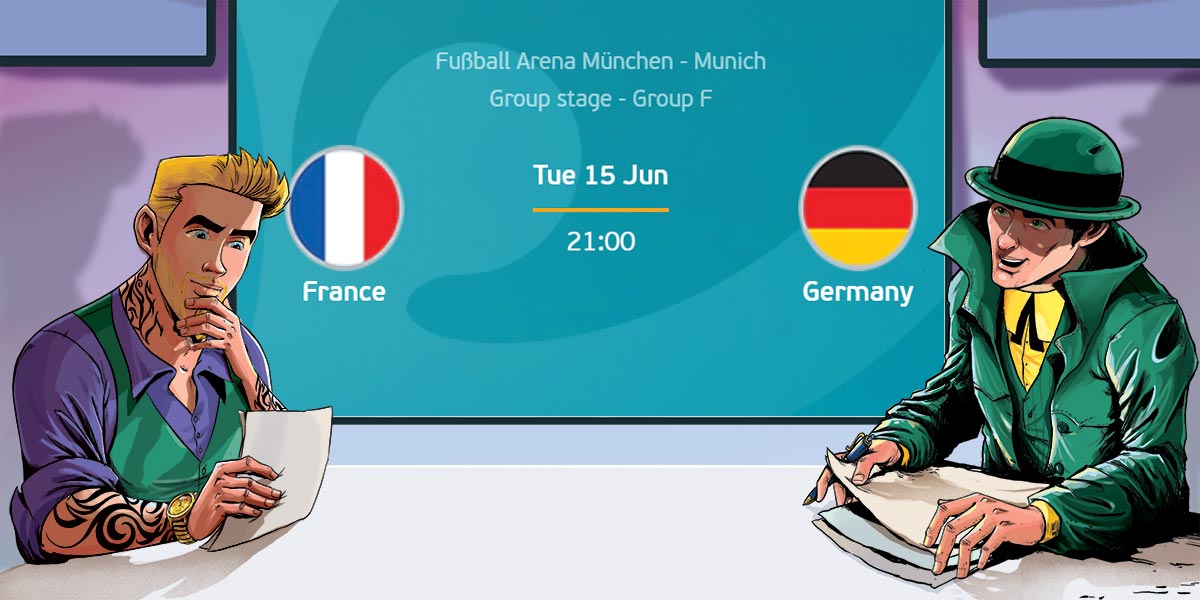 FRANCE AND GERMANY SET FOR A TITANIC TUSSLE

The term ‘Group of Death’ is certainly overused, but entirely applicable this summer as France, Germany and Portugal were all drawn together (along with Hungary) in Group F. A star-studded France are out to add to their 2018 World Cup triumph by adding the Euros crown, with Didier Deschamps boasting a squad brimming with talent. As for Germany, they could be the most vulnerable of the three favorites to advance because it is in a transitional phase with a younger generation of players stepping into the squad. However, Joachim Low - who will step down as Nationalmannschaft coach at the end of the tournament - still has quality all over the park.

FRANCE ATTACK TO MATCH THEIR DEFENCE THIS TIME AROUND

France they are understandably confident about their prospects of following their 2018 World Cup triumph with Euro glory. Coach Didier Deschamps has a squad full of world-class talent and the competition for places was already fierce up front even before the decision to recall Benzema. Most countries would be delighted to have just one of Mbappe, Benzema or Griezmann, and maybe over-confidence is the biggest danger for France.

Solid at the back, as is customary with Didier Deschamps in charge, they are not always as entertaining as they can be. However, the potential is frightening and the squad is outrageously deep in all the positions.  France’s tournament will be defined in the group stage. If they slip up in a tough group, they could face a tricky knockout path, but they will be the favourites in every match regardless of their opponents.

A look at France’s betting odds: France’s only defeat in their opening game of the European Championships was in the inaugural tournament, in 1960 and our first tip of the day is: Double chance – France to win or to draw.

CAN ’DIE MANNSCHAFT’ GO THE DISTANCE?

Euro 2020 will be Joachim Low's farewell party after the coach announced in March that he would resign following 15 years in charge. The World Cup winner will stand down after the tournament, and the mood around the team’s performances and direction changed significantly after that. There had been a lot of negativity due to Germany’s dismal performance at the 2018 World Cup and failures in the Nations League - which included a record-breaking 6-0 hammering by Spain.

The generational changes did not go according to plan either, with Low's controversial decision to axe Thomas Muller, Mats Hummels and Jerome Boateng backfiring spectacularly. Criticism was merciless, but the atmosphere is different now and everyone - including the recalled Muller and Hummels - will be pulling in the same direction ahead of Hansi Flick's arrival after the Euros.

A look at Germany’s betting odds: Germany held France to a goalless draw when the two teams last locked horns in Munich and four of the last six meetings between these two teams have produced fewer than three goals. Oour second tip of the day is: Under 2.5 goals

Scroll down for our final France vs Germany prediction!

This will be the sixth meeting between France and Germany at a major tournament, but their first in the group stages. So far, their head-to-head record is perfectly balanced with two wins each and a draw. Given how tight Group F could end up being, starting with a win is vital. Germany looked confident in their -1 warm-up win vs Latvia, but France are a different proposition altogether. Les Bleus have so much talent and belief that they should get off to a win, but it could be a real thriller.

Final Bettingkick’s France vs Germany prediction is: Both teams to score

YOUR TIP FOR France VS Germany