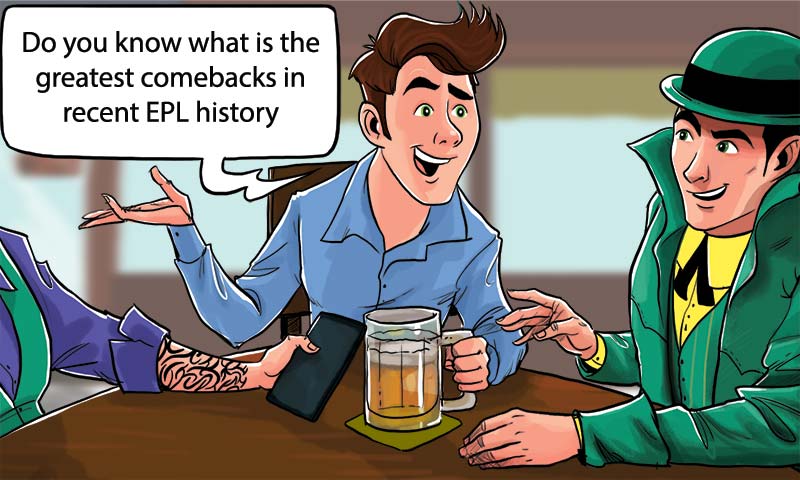 The EPL is the foremost football league in the world, and little wonder with the close contests and frequent comebacks. Here are some contenders and the single best comeback the EPL has ever seen.

There are lots of candidates for the greatest ever comeback, and the criteria one uses can vary a lot. Should it be the biggest deficit overturned? Can snatching a draw be considered a greater comeback than a win? Should the odds defied be the governing factor?

Before we get to the top pick for the greatest comeback the English Premier League has seen, there are some honourable mentions that deserve a quick note.

The North London Derby between Arsenal and Spurs has thrown up some great games over the years, and one of the best was in the 2011/12 season. Spurs surged into an early lead and then made it 2-0, with everything looking set fair. But as any Tottenham fan can tell you, this is usually when everything goes wrong. And so it proved on this occasion, with Arsenal rattling in an incredible quintet of goals to crush Spurs 5-2 and complete a dominant comeback.

Klopp’s time at Liverpool has mostly been a very good one for the club (who won their first domestic title in three decades). But even the most beautiful rose has its thorns, and one match for Liverpool fans to forget came in 2016/17. Playing away at Bournemouth, they flew into a 2-0 lead. A battling performance by Bournemouth made it 3-3 with moments to spare, before the 93rd minute bore witness to Nathan Ake’s winning goal and Liverpool found themselves on the receiving end of a shock 4-3 defeat.

Woe for the Red Devils

In 2010/11, Newcastle quickly went 2-0 down to Manchester United, before conceding another two goals before the halftime whistle. But a valiant effort and defiance in the face of near-certain defeat saw them rescue a point and achieve a famous fightback to make it 4-4 come full time.

The Red Devils were also on the receiving end in 2014/15, when they were playing Leicester City. Manchester United got themselves 3-1 up, but David Nugent and then Esteban Cambiasso levelled the playing field, with Jamie Vardy and Leonardo Ulloa adding the final goals to complete a famous 5-3 victory.

The unpredictability of sport is what makes it so captivating for fans and so much fun as a topic of conversation. More and more footie fans are having a little flutter to see just how good they are at forecasting match results, and many are also enjoying great online casino games (ideal for the off-season or if you have a little time to kill). Casumo Casino is a top-rated brand with an impressive array of the best games, enticing bonuses for newcomers, and a strong reputation. If you’ve decided to make the shift from sports betting to slots and table games, it’s well worth a look.

And so we come to the greatest comeback the EPL has ever seen. Controversially, it’s pretty recent, and, surprisingly, it involves Tottenham Hotspur, but in a good way. Spurs fans are familiar with the agony of getting close to glory yet falling at the last hurdle, but this match in 2017/18 was a definite highlight in the club’s recent years.

It is worth pointing out that Tottenham had a much better season overall than Leicester, finishing 3rd in the table at the season’s conclusion (on 77 points), compared to Leicester’s solid but unspectacular 9th (and 47 points). However, that does nothing to diminish the fantastic comeback Spurs achieved when the two sides met in May 2018.

The match got off to a cracking start with both sides scoring inside 10 minutes (Kane for Spurs and Vardy for Leicester). When the halftime whistle blew, Spurs found themselves 2-1 down, and just a couple of minutes into the second half matters went from bad to worse when Iheanacho scored in the 47th minute to give Leicester a 3-1 lead.

But matters were not to rest there. In a tumultuous 13-minute period Spurs racked up three more goals, including an own goal courtesy of Fuchs, to lead the match 4-3. Vardy then kept heart rates high with a 73rd-minute strike that put the scores level once more, this time at 4-4.

There was a sting in the tail, however. Kane also had a second goal in him, and this proved the decisive blow in a fantastic, famous 5-4 victory from 3-1 behind, and a great moment for Spurs fans. While Leicester could not, in the end, get even a point they did make this a real contest, and perhaps the single greatest comeback the EPL has ever seen.

It’s precisely these amazing turnarounds that make the sport so entertaining to watch, and to bet on (especially in-play, when the odds can change rapidly). If you’re intrigued by the prospects of betting but lack experience just click our handy link for an introductory guide.

The EPL has millions of fans in every country on Earth precisely because it’s so highly competitive from top to bottom, which creates an array of thrilling comebacks every single season. The ones mentioned in this article are some of the very best, culminating in Spurs’ great escape against Leicester, and there are bound to be more in the near future.